Chelsea Austin Recounts Growing up with Two Gay Dads in the 90s in New Book, “Inexplicably Me” 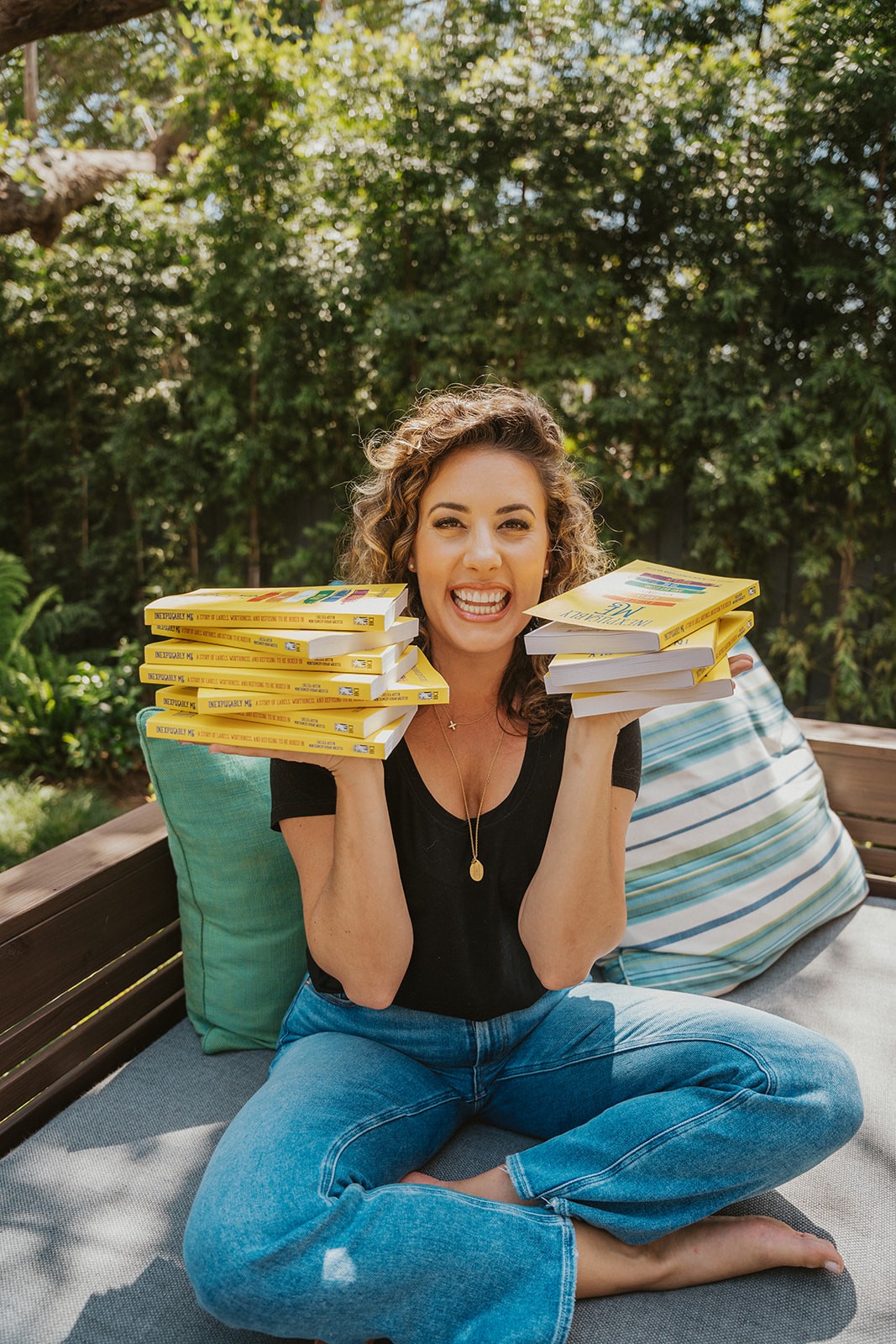 Writer, speaker, and life coach Chelsea Austin grew up showered in affection. “It was clear from the time I came into my parents’ lives that I was the center of their universe…for better or for worse (I couldn’t get away with anything…I’m pretty sure my dad had ears and eyes everywhere). My dads showed up to every recital and took me to dance classes, voice lessons and acting classes all over Los Angeles County. I even had a special desk set up for me at my daddy’s office for when he had to work Saturdays during tax season. My dads showed up for me when kids at school were challenging to deal with. I was shown by my parents that anything is possible. So, to say that I knew I was loved would be a huge understatement.” This warm and cozy environment was sometimes harshly contrasted with the judgment of others. “Of course, outside of our home, it wasn’t always easy. I had to learn early on that politics have a way of interfering with our private lives and that not everyone was always going to be so open and loving to our family. We were even uninvited to Christmas one year because one of my aunts didn’t know how to tell her kids that my parents would be sleeping in the same room. My childhood had this very interesting dynamic between feeling so accepted and loved and feeling completely misunderstood. I grew up quickly because of that. I had to learn to deal with adversity early on, as many children who are ‘different’ do, but to be honest, I consider that a massive blessing because it taught me resilience and how important it is to be open and loving to those I don’t understand because we’re all going through something, whether or not it’s obvious to the outside world.”

Chelsea just recently debuted her first book, Inexplicably Me. “My book, Inexplicably Me: A Story of Labels, Worthiness, and Refusing To Be Boxed In, is my love letter to the world. Yes, it’s my story about being raised by two gay men, both of whom I’m biologically related to, but it’s also a guide for how we can tap into our self-acceptance as a way to begin accepting others, even those we may not understand. I am grateful that I was able to tell my story with joy and humor, and use my own experiences to give some more universal advice.” She has already been a trailblazer from birth by being California’s first single-parent adoption case for a same-sex couple where one of the child’s parents was the sperm donor in the state (his cousin was the surrogate and sister-in-law the egg donor). In spite of the scrutiny of fascination, she cherished her fathers dearly. “I felt special. When I was growing up I didn’t know anyone else with gay dads, and certainly not ones to whom they were biologically related. I loved that part of my story. But it also felt like perhaps it would make things easier if I came with an instruction manual. People always had questions. People were always curious, sometimes in a positive way and sometimes in a critical way. I got used to being an adult early on. I had to answer a lot of questions that as a young child many are not expected to answer or even know the answers to. But to me, it didn’t matter what others thought of us. I was always so proud of my dads and our little family that even when it felt like society was against us we could find refuge in the beautiful home Dad and Daddy built.”

Of course, it didn’t take long for Chelsea to be singled out by her peers. “From a very young age, maybe even at three years old, I could already tell my family was different. One time I was at the playground and was building sandcastles with another little girl and she asked me where my mom was. I told her that I didn’t have a mom, that I have two dads and to this, she responded, ‘You either have a mom or she’s dead!’ It made me laugh and I shrugged it off, but man oh man, kids can be brutal. It was from interactions like this or really anytime someone asked me where my mom was that I knew something was different about my family, but it never really put me off. I was always so proud to show off my parents.” The novelty soon wore off and her parents became beloved in the school district. ”I am very fortunate to have grown up in the very liberal bubble that is Malibu, California, so kids at school weren’t all that upset by my having two dads. My dad was always around. He was either the President of the Parent/Teacher Association or working in my classrooms. He was a fixture at every school I attended, and my daddy was never far away either. My parents were the parents you could rely on and funnily enough, they ultimately became the staple old married couple at my schools. Most of my friends’ parents were divorced, so my parents were a source of stability for many of my friends.”

Chelsea has found it interesting to try to cultivate her own identity in a world that has always defined her by her parents. “This is one of those things that is tricky to explain and I think I have struggled with it my whole life. I have always defined myself as ’the girl with two gay dads’ and so it’s been hard to think about who I am outside of that. A big way in which I was able to craft my identity as a child and teenager was by tapping into what I was passionate about and having parents that were always supportive of whatever it is that I wanted to be doing. When I wanted to sell potpourri instead of lemonade my parents set up a stand for me. When I wanted to start a dog walking business my parents helped me post the advertisements. They were always happy to support me in whatever it was that I wanted to do, which meant that I wanted to show the world how incredible my dads were and that they could raise a fantastic child. This obsession with being perfect, though, meant that I never rebelled, so as an adult I’m still working on a lot of my identity formation. However, I think a part of that is normal too since in every chapter of our lives we’re always shifting and shaping to figure out who we are and how we want to show up in the world. She’s perpetually invigorated by the prospect of growth and change. “Defining and redefining are probably my two favorite words when it comes to self-development and furthering my feelings of self-worth. I love to give everything a definition that empowers me to live that aspect of my life fully and authentically. Everything, from how I define success and achievement to the labels I am given, has allowed me so much more grace and an ability to tap into who I am and what I have to offer the world. It’s also really important to consistently check in with our emotions in any given situation. For so long I wanted to be liked by people so badly that I would tend to adopt their likes and dislikes without really taking into account what I enjoy. It may sound elementary, but checking in with my emotions as often as possible has helped me so much in solidifying who I am, what’s worth my time and what I enjoy.”

This motivation spilled over into a desire to help and guide others. “I decided to become a life coach because, while I often give life advice to people, I was afraid that I wasn’t necessarily doing it in the way that would help them accomplish the most growth possible. I wanted to have methods and a deeper understanding of how I could support those in my community online, through my book and in my everyday life.” Living freely is the key to laying the foundation for a more empathetic world. “A big part of showing kindness and compassion is tapping into your empathy, continuously showing up for yourself and others, setting compassionate boundaries, being honest and being your authentic self. I feel like all of that is easier said than done, but a simple way to get started is to focus on how we can be fully present with people. Think about how we can offer our full attention to someone by putting down our phones and listening to what they have to say instead of thinking of how we can respond or what else we might like to be doing. It’s also vitally important that we take care of ourselves, whatever that means for you, so that we can go out into the world and feel rested and more human. We know when we’re being kind and compassionate and when we aren’t. The trick is paying attention and asking yourself the question– ‘How can I be more kind or compassionate in this instance?’ Keep asking yourself the question and keep checking in.” When your good intentions radiate from within, there’s no limit to the impact you can make.