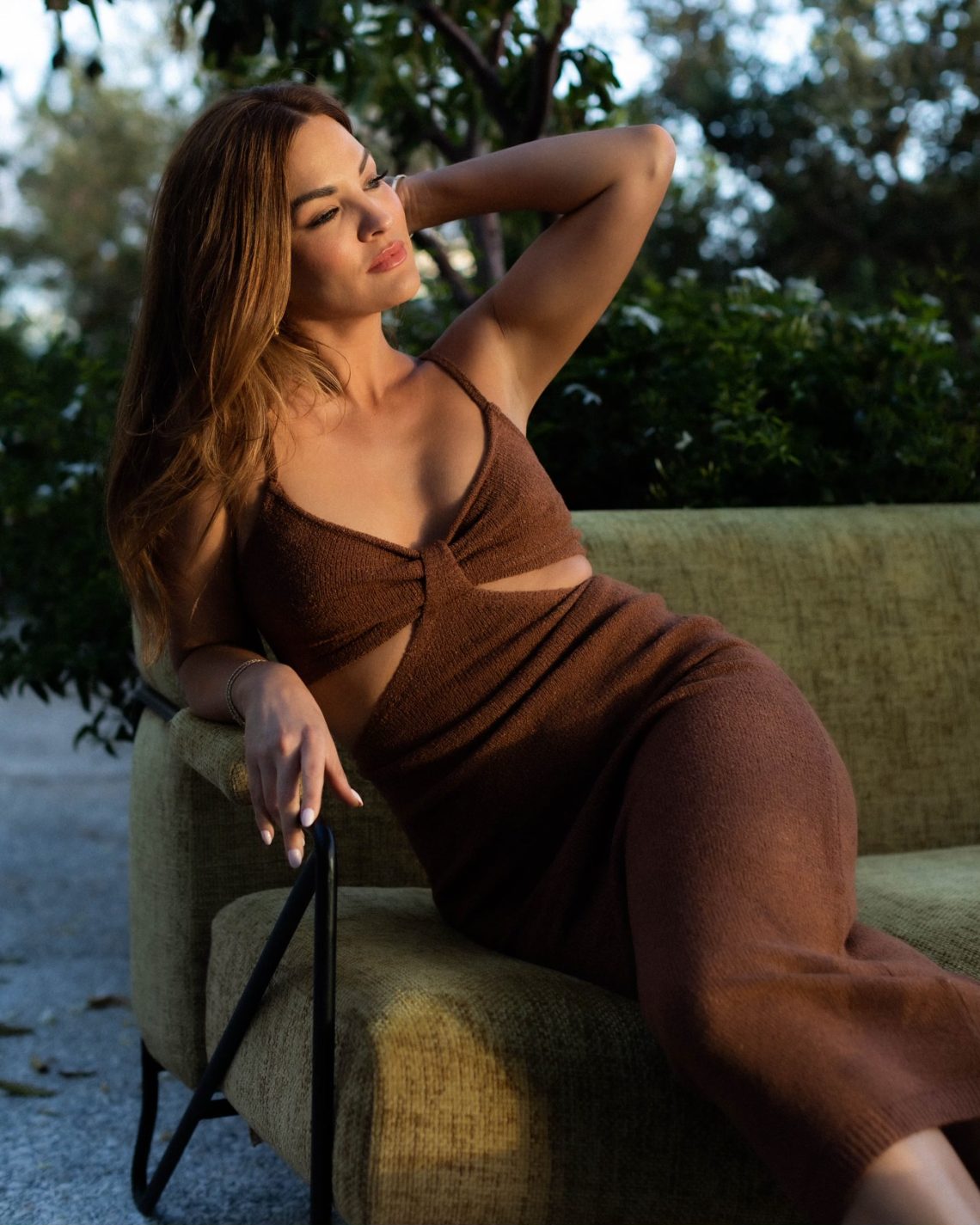 The Bachelor alum Becca Tilley has walked a long road since her fabled Flat Tummy Tea era of 2015. “It was a rite of passage, and then you look back and you’re like, why, why would I ever have done that? Especially when I first started working with brands coming off the show, no one else was doing it that I knew. So it was very unfamiliar to me and I was doing all of my own deals. Like I didn’t have a management company or anyone helping me. I was negotiating my own brand deals myself and Flat Tummy Tea was one of them. And then I posted it and people were so upset with me. I realized that I have to be careful about what I say yes to. I can’t just say yes because of money,” she recalls with a grimace of embarrassment. Her audience swiftly reminded her of her impact and newfound responsibility as an influencer. Becca had initially approached brand deals as a one off transaction, being mindful that her presumed 15 minutes of fame could run out at any time. The misstep taught her to be more mindful of her endorsements. “I didn’t know how long I would be doing this. And so for me, I thought, ‘While this season of The Bachelor is airing and people have interest in me, I can make some extra money doing it. My mentality was to say yes to everything because who knows when this will go away. But I think that Flat Tummy Tea thing was kind of a moment of being like, ‘Okay, if there’s the chance of this lasting longer than I thought, I can’t say yes to everything. There has to be a moral compass here.” Protecting her audience became paramount. “I’ve said no to a lot of opportunities and a lot of money to make sure that I’m aware of what I speak on and the products that I talk about. If I ever was promoting something that was potentially harmful to somebody, that eventually leads back to me. That’s something you do have to be aware of. Some people might say it’s not that deep, but for me, I think that moment was one of clarity where I thought ‘If this is what you’re going to do, then you have to do it the right way.’”

June marked the beginning of a new chapter for Becca, as she finally decided to go public with her relationship with singer Hayley Kiyoko after four years. Despite being transparent about their bond, Becca found that announcing their relationship to her audience brought a wave of unexpected relief. “To be honest, I didn’t really expect to feel a weight lifted off or to feel lighter. We have not been public on social media or in the media, but we were very public in our life. If we were out together at a restaurant and someone came up to me and listened to my podcast or wanted to say hey, I always introduced Hayley as my girlfriend. So for the last four years, I didn’t feel like I had a weight on me until we were public. And then I thought, ‘Oh wow. I was carrying a weight and I didn’t realize how much lighter I would feel not having that on me or having to not use pronouns on our podcast and just avoiding general questions like that. I feel good.” Her announcement instantly resonated with many of her followers, awakening her to the power and impact of coming out on a broader scale. “I knew that people would be supportive, but I don’t think I was prepared for so much love and support. I also just hadn’t gotten past how I was going to feel to even realize that maybe my story could help other people. I hadn’t even gone there mentally because I was just focused on getting through it personally. I’ve gotten so many messages from people who really relate to my story or who have navigated the same things or people going through the same things. It was really nice to think, ’This is so much bigger than me navigating criticism.’ It’s so much bigger than my feelings getting hurt by someone disagreeing with my decisions. That was something that I was really overwhelmed by, but in a really good way.” 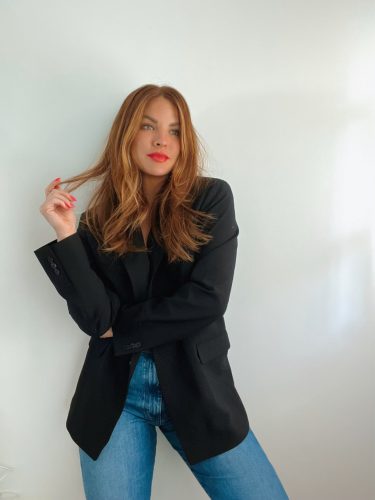 This realization reminded her both of how far she’s come in terms of her ideological journey and how vital her perspective was in assisting others to come to terms with their true selves and those around them. “I didn’t feel a sense of pressure to be public because for me, I knew that being public meant giving people the opportunity to criticize or have opinions on my relationship. I think what I’ve realized is that people are going to have opinions, whether it’s out there or not. We still have control of what we share and what we talk about. I think it’s important to have these conversations about life and navigating sexuality and topics like religion and things that I sometimes get presented in such a shallow way. For so long, I just had one viewpoint of everything and it was always at a surface level. This conversation specifically has given me a chance to go deeper and talk about things that maybe I haven’t been open about in the past and like navigating certain things. So it’s opened up so much more that I didn’t even think about when I was debating, ‘Do we come out publicly or do we not come out publicly?’ So it’s been good. I’m very positive and I’m grateful for it. It’s nice to go a little bit deeper.” Her surprise revelation has been a delightfully gay twist on a franchise that’s often dismissed as excruciatingly heterosexual. “’My season aired seven years ago. I’m fortunate that I’ve been able to give credit because everything that I’ve done since The Bachelor is because of The Bachelor, but I’ve also been able to separate my life a little bit from that world. I hope that if anything, it gives people a different perspective of what love can look like. And I think that’s the whole conversation is normalizing same sex relationships and not making a spectacle of it. Just being able to say, ‘I fell in love with someone and maybe it wasn’t who you were expecting me to fall in love with.’ Becca’s heart was warmed by the enthusiastic cheering for her happiness, regardless of gender. “Something I realized when we came out was that so many people were just rooting for me to find love and be happy. In my mind, they were only rooting for that if it was with the man and I think in the best way possible, I recognized that so many people just love love. It’s important to have this conversation of normalizing it and not making it seem like it’s so different or so unique. It’s the same thing. We hear ‘love is love’ all the time, but it’s as simple as that. It’s having that conversation and just showing people that.”

Hayley has shown her the virtues of vulnerability. “I had never been in love before Hayley and I was really scared. There was a sense of pride I had of being ‘the cool girl’ who didn’t let her guard down. When I met Hayley and we fell in love so fast, it was all the feelings. It was scary. It was exciting. It was like a whirlwind. It was basically what everyone had always told me about. I was just experiencing it for the first time and experiencing it with a woman for the first time. I think our relationship has opened my eyes to a love that I honestly never saw for myself because our love is such a beautiful partnership in the sense that we both put in the effort. It’s also so effortless because we love each other so much that putting in the effort doesn’t feel like work. We want to have the best relationship we can, so we do what we need to do.” When two perspectives enmesh, a beautiful mural can be painted. “What our relationship has shown me is the beauty of having differences with someone and being able to see a different perspective and hearing a different side that maybe I never would’ve opened my heart or mind to, without someone who I love and respect thinking that way. It might be different than what I expected, but we always say to each other, ‘You’re my safe space.’ And I think that’s what you really hope for in a relationship is to find that feeling specifically.” Becca had doubted whether true love was really in the cards for her. “I always thought I was too emotionally difficult. Even when I met Hayley, I was in a very single phase and I was very content with being single because my whole thought process was ‘if I don’t want to hang out with that person all the time, I’d rather just be single.’ I like being alone. I always felt like maybe it wasn’t going to happen for me. I was okay with that. And then when I met Hayley, I thought, ‘This is worth waiting for.’” Not only has she found the woman of her dreams, she’s also discovered the vibrancy of an entire community and an extended family that will be there to hold her hand every step of the way. Welcome home, Becca. The door has always been open for you.

Vegas, Music, and Fashion with Manika