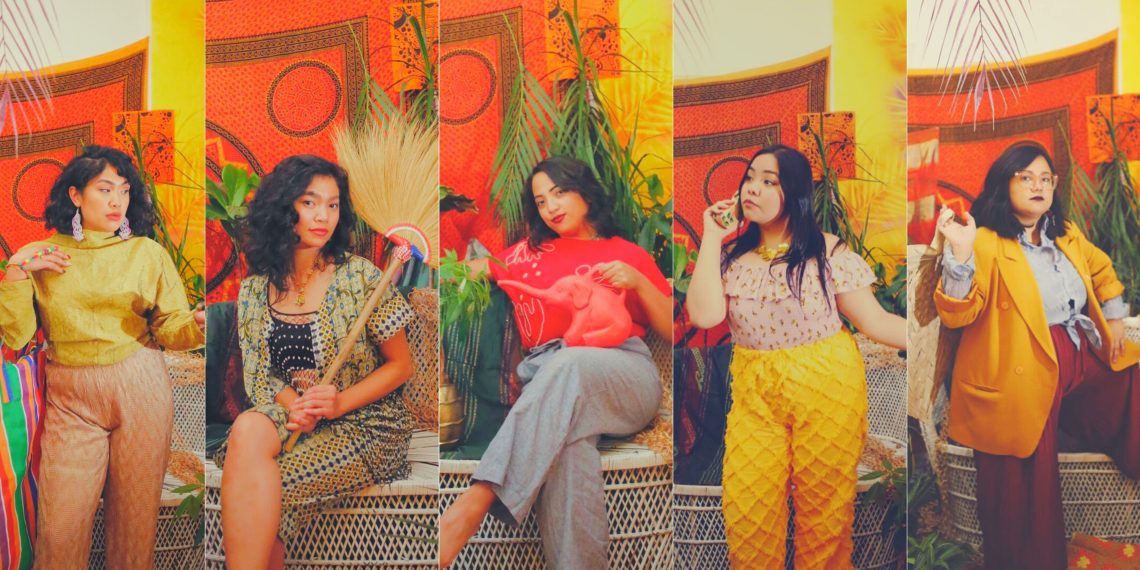 Often, the strongest friendships produce the most bountiful art. Such is the case for Ann Paula Bautista (The Grand Theatre’s GROW the Musical), Belinda Corpuz (Factory Theatre’s Lady Sunrise), Ellie Posadas (Scarborough), Alia Rasul (Super Important Filipina Thoughts), and Maricris Rivera (Short Dances). Belinda recounts, “Ann Paula, Maricris and I met through various youth theater programs from a very young age, often we were the only Filipinas in the room, so we became close. Ann Paula and Ellie both went to Randolph College for the Performing Arts to study musical theater. We met Alia, who had just completed the Second City Conservatory program at a Filipino Comedy show. We met and came together to collectively create and perform a play called Anak at Carlos Bulosan Theatre. It was then we realized that we all had similar ambitions as artists and, more importantly, the same values and principles. We also realized the potential of our collective. We went on to collaborate on a few more projects, bringing in more people who would eventually become a part of the collective. As our collaboration grew, so did our sisterhood.”

This camaraderie among the four eventually grew into the Tita Collective, a all-Filipina collective based in Canada composed of award-winning playwrights, comedians, musicians, dancers, theater makers and actors. Through theater, comedy, music, and movement, they aspire to tell stories that thoughtfully honor and celebrate their roots and history, explore their identities as Filipinas, representing the narratives of the Philippine diaspora in an inclusive and respectful way. The idea originally sprang from a mutual desire to find community support. “The Tita Collective started as a mutual support group for Filipinas in the same stage of their careers in the arts. It was a group of peers who shared resources, advice, took care of each other, nurtured each other. In building that trust, we inadvertently created a space to safely play and create and be our full selves. We each were no longer the only Filipinas in the room, and without the pressure of being tokenized by systems that were often limited and oppressive, we became more empowered to become unapologetic in how we spoke about being Filipinas,” Belinda explains. The nourishment they received from one another strengthened their resolve to demand more from a society that attempts to keep them in the shadows. “Reflecting back on how the collective came together, it was born from a place of seeking empowerment – a response to our frustrations with patriarchal and capitalist systems and institutions that did not foster a safe, equitable space to create art. Creating Tita Collective was an act of resistance to systems that couldn’t even imagine a space where a group of Filipinas could thrive together. We wanted to bring our dreams to life, and we realized that we could do that together, as long as we did it in a way that prioritized the well-being for each of the collective’s members first. We very much believe in the notion ‘if you want to go fast, go alone, if you want to go far, go together,’ we intend on going far.” 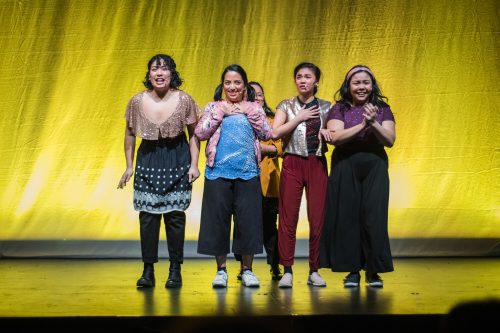 The community’s warm response to the Tita Collective’s opening show reminded Alia that the troupe was truly a collaborative effort. “We extend the care we have for each other to our community as well. Initially, our mandate was to ‘elevate Filipino stories on stage’ but that changed quickly after we saw how our first show, Tita Jokes, was received; not just by the audience from our sold-out shows but by the level of excitement and level of support that we received from our elders and community members. Our first major funder was not an arts council. It was Tinuno, a Filipino restaurant, our rehearsals are often catered by Kanto, and a Filipino grocery store, DGA Variety.  It was a humbling experience, and a pivotal one.” Belinda adds, “We decided early on that we would strive to create art FOR and WITH our community. Without them we would not be the collective we are today. Through our art we aim to foster a reciprocal relationship with our community. This collective was created not just for us, it was and continues to be for our community too.” Art is the key to not only education, but learning how to freely unlock parts of yourself without fear, as Alia knows well. “Art is fun! Art meets people where they are. There are so many lessons to be had in all the different ways people interact with art, whether passive, active, individually or collectively. One of the most important things I’ve learned from art is that it is absolutely okay to fail. This may sound so obvious, but as a Filipina, or as an Asian girl growing up, you’re often discouraged to express yourself, and when you do it needs to be perfect. That’s a lot of pressure. I think more and more, we are more accepting. Now, we know that failure is absolutely a requirement to learn. We also use comedy in our work, because it is the most approachable way to discuss things that have been a challenge to talk about within our community: queerness, intergenerational trauma, patriarchy, among other things. We think having a lighthearted approach to things gives us a better chance to get our foot in the door on those difficult conversations.”

Belinda hopes to teach folks that the Filipinx experience is infinitely broader than what they’ve seen on TV. “Filipina/o/x’s are not a monolith. The Philippines is an archipelago of 7107 islands. There are Filipin* diasporas and communities all over the world. With that brings an abundance and richness of histories, experiences and cultures. From our lens as Filipinas, we want to break down stereotypes that are still often shown in mainstream media. The Philippine story is so complex and vibrant, and I think as members of the Philippine diaspora we’re often short changed on how beautiful and rich our history and our culture is.” The Tita Collective aspires to celebrate the diversity of the Filipinx diaspora. “The Philippines has experienced more than 400 years of colonialism. In that time we lost a lot of our stories. We have experienced an erasure of our culture and heritage. There’s been a lot of trauma experienced by our people, and everyone has a different relationship with their roots, but I think when we come together to share our stories, we can begin to heal,” says Alia. If you’re looking to unite a community, start with a simple chuckle. “Laughter has always been a tool of resistance. It’s hard not to feel empowered when there’s so much joy, and you’re having a laugh with your community. With everything that’s happening in today’s world, it’s a huge effort to stay uplifted. When you’ve created conditions for laughing, it means that you’ve created a safe space for people to be vulnerable, funny and silly. You’ve created a space where people feel like they can just be themselves. That’s a healthy place to be. And there’s that saying, ‘it’s only funny because it’s true.’ When people laugh together, it’s because you’ve connected with them through a common understanding.”

To encourage more inclusion, Alia points out that we need to deconstruct the narrative that Filipinxs have to be at the top to be noticed. “We need to have more respect for all of us as a community, and less emphasis on competition. I think Filipinos have historically experienced a high level of marginalization and erasure that it often feels like there isn’t enough to go around. We have a strange obsession on who is the first to achieve something, or who has the highest score, whether we won first in boxing or won a beauty pageant. Wouldn’t it be nice to just come to an understanding that we are worthy of attention simply because we are who we are? Instead of always focusing on getting the first spot, wouldn’t it be radical to focus our attention on making sure there’s a second, a third, and so on? I think we need to learn to think more abundantly than we do. That way we make room for all of us.” Ultimately, people of color have immense power that Alia says will only be enhanced if they join together in the quest for proper representation. “I think the most important lesson we keep going back to is ‘If you want to go fast, go alone. If you want to go far, go together.’ People of color are the global majority. It’s going to take all of us to shift the narrative, so let’s do it together. Let’s help each other take up as much space as we can. Let’s build the world we want.”

The Young and Beautiful: Interview with Kaitlyn Dever

Party Throwing 101: How to Have a Successful Gathering Every Time