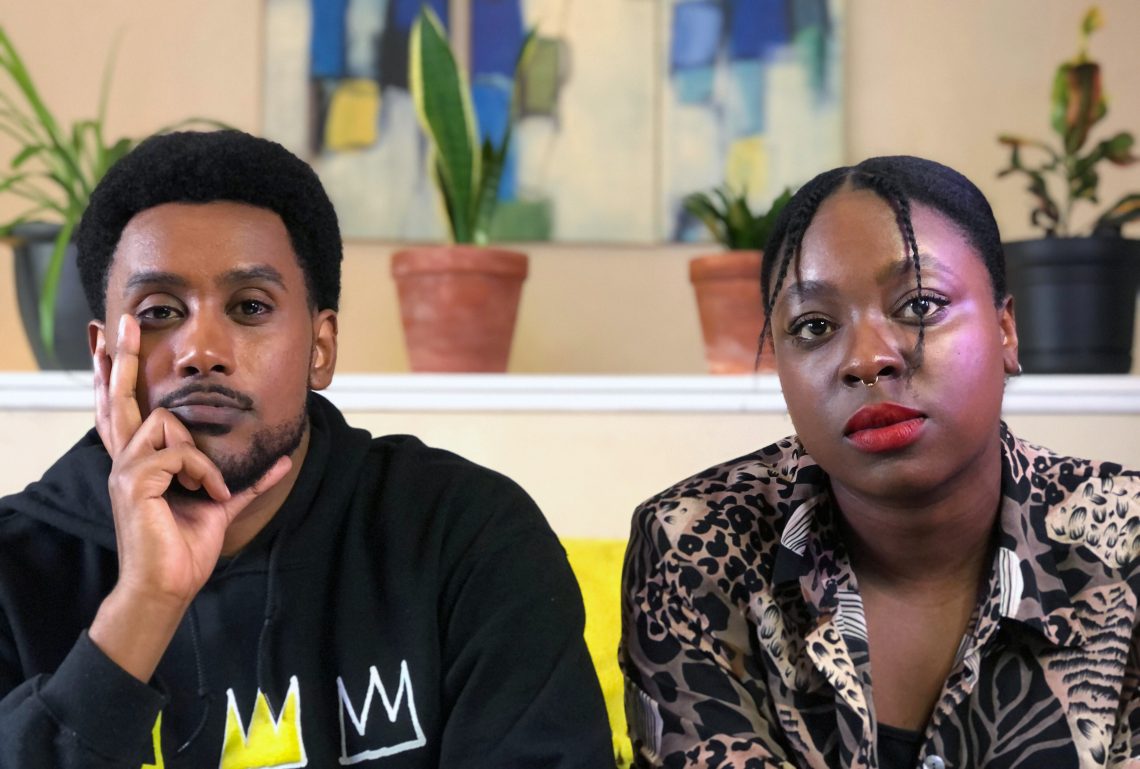 For actors/directors Araya Mengesha and Khadijah Roberts-Abdullah, the one silver lining of quarantine was each other. “Having a roommate during the pandemic became a lifeline,” recalls Araya. “We were already three years in, as roommates, when the first lockdown hit. So, there was so much comfort and understanding of our common values when that first big fracture of the pandemic hit. We got to avoid the tough negotiations that some other folks had to deal with around how vigilant we were going to be as a household. Sharing space like that around the clock definitely had its challenges, but for the most part we actually had other people to share our fears and frustrations with and then ultimately it led to us making our film.” Khadijah seconds, “We’re lucky enough to live in a beautiful apartment with outdoor space and an incredible landlord, so it was an added bonus to have such a great dynamic between roommates. There was a lot of care put into making sure that we were navigating space with consideration for the many ways we were each responding to this new and invisible danger in our lives.” As the world began its long sojourn through COVID, we bore witness to yet another plague endemic in America: police brutality. Experiencing the pandemic simultaneously with the BLM protests only augmented already fomenting distress. “I had a lot of feelings of helplessness. The isolation made me a little stir crazy at times and I missed my family and friends a lot. On top of that. I was genuinely scared by what I was reading in the news about COVID each day – those case numbers and reported deaths were really startling – so when all of these stories about police brutality were suddenly being amplified, it made me feel like there were too many threats to keep track of,” Khadijah says. “I remember it being such a strange combination of conflicting angers, disbeliefs, and in a new way the prospect of this whole thing maybe being a wake up call to us all. The idea that everything could grind to a halt was unthinkable and then, in that pause, a revealing of some extremely hard truths was a lot to absorb,” admits Araya.

In response, they decided to direct and star in DEFUND. “DEFUND is the story of twin siblings that are still living together in their 30s when the pandemic hits and the BLM movement has hit its height during that long hot summer of 2020. It begins as a domestic comedy about those surreal early pandemic days and then begins to shift as the twins are continually confronted with the call to arms from the BLM movement happening outside the safety of their home,” Araya explains. Khadijah elaborates: “This short film was a way for us to respond to what we were witnessing in the world between the pandemic and the BLM uprising. It was also an opportunity for us to exercise our skills as artists at a time that felt like our industry and the entire world had come to a halt.” The main characters, Brother and Sister, aren’t as mirrored in their approaches as one might assume. “We naturally have a very sibling-like dynamic, so we knew that we would cast ourselves as brother and sister. The idea of them being twins was to show how even two people who have literally shared their whole lives together, since the womb, could see a loaded term like ‘DEFUND’ and have two different ideas about what that really means. These two aren’t going to stop working towards the fight for Black (and all) folks to feel safe, just because they have differing views. In that way, having them hold these archetype names is meant to keep the story universal,” says Araya. “The idea of a twin brain also offered us really fun filmmaking opportunities. There are moments in the film where we see the twins engaging in conversation without any eye contact, moments when they’re side by side and finishing each other’s sentences, and moments where we split the screen with extreme closeups on their faces to really drive home how intensely engaged with one another they are,” Khadijah expands. 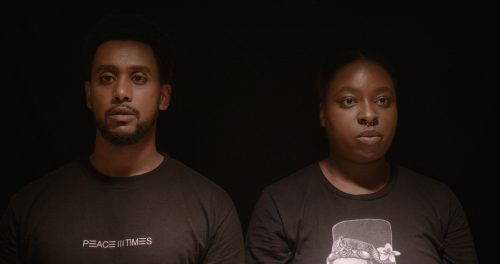 DEFUND became a snapshot of a moment in time. Most importantly, it became an avenue for them to reclaim power. Araya remembers: “It was definitely very freeing to be able to put our experience into this film. Because the opportunity to make this came so suddenly and we didn’t need to wait to secure funding or locations or any other resources, we were able to capture the immediacy of our experience, as it was happening.” Khadijah saw the film as another level of engagement. “So much of what we were witnessing in the world during the summer of 2020 left me feeling quite helpless as an individual. Making this film really did feel like the one thing we could do to enact some change after signing the petitions, marching in the rallies, and emailing our local politicians.” The twins have disparate ideas, but are ultimately one another’s port in a storm. To a certain extent, Araya muses, it’s a reflection of their own dynamic. “Some of that has to do with how we are in real life. I think we both have a little of each twin in us. For the characters we needed to create clear differences to highlight the ways that they’re different. But despite their differences, they have a shared connection that we call ‘TwinSpeak’ that shows how bonded these two really are. They’ve spent their whole lives together, so they can be free to be as loud or reserved as they feel like being around each other. In some ways that was another coping mechanism in those early days, just being able to express how you feel.”

Brother and Sister are a testament to the broad spectrum of viewpoints in the Black community. Araya wants to stress that especially in an anti-Black world, no response is incorrect. “I would say that they represent the multifaceted ways in which we protest and the diverse makeup of our communities. We really want to highlight that Blackness is not a monolith and every reaction is a true and ‘right’ reaction to the myriad of ways that Black folks are tasked in facing institutional racism and codified anti-Blackness.” Predictably, the mere notion of defunding the police has become so distorted as to render any meaningful policy discussions nearly impossible. It’s a cycle that Araya knows well. “I think when you have a term that gets viewed as being very loaded, it leaves room for people who don’t understand and/or oppose that terminology to fill in the blanks with their fears. As often happens with terminology that’s meant to point to a systemic problem, it gets co-opted and then used against those that only needed that language to seek equity. Especially in a political space, when a term becomes so hot button that it can’t be used without being weaponized, it ends up being abandoned. Which is a very clever way of diffusing the momentum of what could be a truly significant moment.” Khadijah is perceptive to the potency of fear. I think that many people are afraid of anything that feels unfamiliar and the movements around the world that are calling for police reform present a threat against one of the most archaic and familiar systems that we know of. The alternatives to policing do exist and are growing in popularity and I have faith that despite the resistance, we’ll see them become even more common.” We can all work together to move towards an anti-racist and pro-Black society. “What I would like to see is a society that releases Black people from the pressures of respectabilty politics. One that builds more schools, more housing, and more job security in our communities. One that lets us celebrate our uniqueness, our beauty, and our awesomeness without being accused of ‘reverse racism.’ Simply put, a society that lets us live our best lives without the threat of physical or emotional violence.” Adds Araya: “It feels like Black bodies moving through this world without the responsibility of having to be aware of how the world will view them, beyond beautiful and full of possibility.”

‘The Edge of Seventeen’ is Out Now on DVD