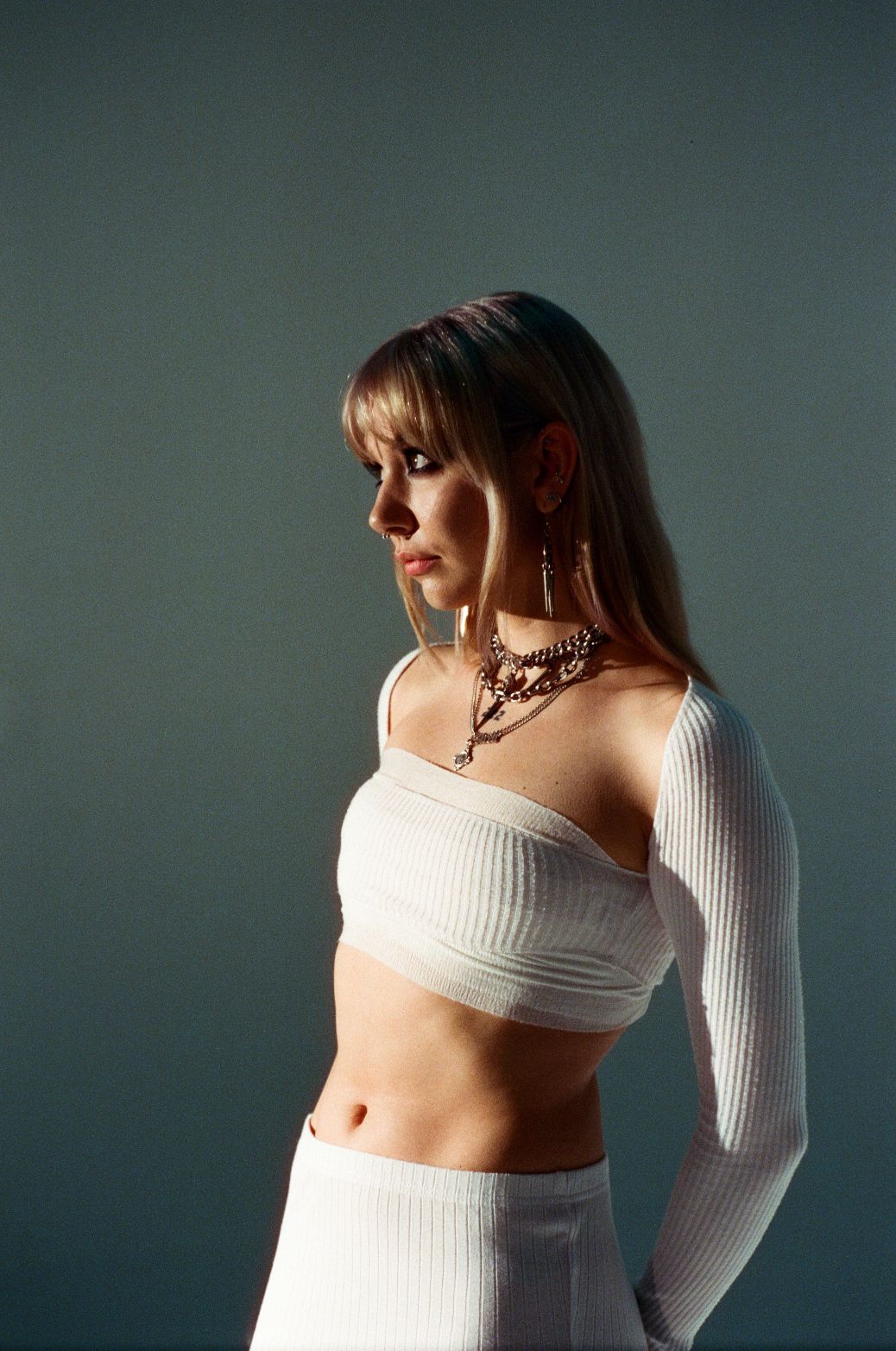 KiNG MALA is a bad bitch. It’s literally in her name. “I wanted something kind of masculine and feminine, just because I like playing with masculine tropes with this project. Mala is bad bitch in Spanish, roughly translated. I’m Hispanic so it’s a nod to that. I just felt like it encapsulated the vibes of the music. Even though I’m actually such a baby in real life,” she admits sheepishly. Transforming traditional masculinity into something unexpected is one of her favorite pastimes. “The idea of taking something masculine and making it feminine feels like you’re taking power in something that wasn’t necessarily made for you. For example, I think it’s pretty classic, wearing a suit jacket with a big shirt, no pants, really hyper femme makeup – taking something that’s traditionally really masculine and turning it into a beautiful feminine thing. It feels like taking a stereotype and flipping it on its head. It’s a middle finger to masculinity in general. Her own journey with self empowerment is still a process. “I’m still in the depths of it, for sure. Because some days I definitely feel more confident than others, but I think it took me a long time to feel like I deserved to have a voice or I deserved to have something to say. Just empowering other women around me makes me feel really powerful. I feel like women are so powerful and with my friends or just the women around me, I can see them not believing in their own power. And I think that reminds me that I’m probably also not believing in mine. Empowering other women is a reminder to empower myself. I’ve been trying to do that for a long time.”

You could say her latest single, “i hope you know what you’re doing,” takes power back in terms of finally accepting the reality of a disappointing romantic situation. “I was obsessed with this person who was not that into me. She was definitely leading me on and doing the whole thing where…you know, I feel like after this happened to me, I noticed that this happens to everyone. They’re super into at first and they make you feel so special and excited and you’re really into it. And the minute that you’re all in, they’re like [makes double peace sign] goodbye. It was a full ghosting, leading on type of situation, which I had never actually been through before. It was so long before I noticed what was happening and I was totally just playing into it. It took over my brain for so many months and I came into the studio that day and I thought, ‘Yeah, I know that she is leading me on.’” That’s not to say she didn’t enjoy the masochistic aspect of that purgatory. “I thought, ‘I’m just kind of being like a puppy at her heels, but I just can’t stop. I love it. I’m addicted to the pain of it all and the drama of it all.’ Apparently, I love people that are unattainable. We ended up writing a song about that situation.” Rather than pity herself, KiNG MALA basked in the full gamut of human emotions. It’s better to release it than bottle it up. “Instead of taking it from the lens of sadness, I decided to just lean in because apparently some part of me loves it. So I wrote from that perspective. It’s a happier tone and sort of saying, ‘You’re hurting me and I love it.’ Having things happen and having people break your heart and falling in love in the first place and being into someone in the first place…all of it is such interesting material and it’s so fascinating to go through. I’m just obsessed with feelings in general and feeling as much as I can, good or bad, because it’s all going to happen.” Her second EP is at long last coming to fruition. “I’m putting out a seven song EP in October. It’ll be my first EP or project that I put out probably in two years. I’m so excited to actually release a collection of songs. I’ve been focusing on just writing music for a long time. I thought the EP would be a collection of songs that I started a long time ago, but a lot of them are really recent additions. So they feel really fresh and really relevant to what I’ve been going through recently. The whole EP is just super cathartic and it’s really representative of who I am right now, which I’m very excited about. I feel like putting out a project, typically you’re putting out a representation of who you were a year ago, because that’s when you wrote the songs, but all of these songs came together really recently and I knew I wanted to release the project. We ended up writing these seven songs that just really went hand in hand.” The ultimate vision is for all of the music videos for the EP to be thematically connected and exist in their own self contained cinematic universe.”I think I just am obsessed with the idea of conceptual albums and having a project live in one world. So I got together with my director, Connor Sorenson many, many months ago and told him, ‘I want to build this particular universe.’ I wanted them to all live in the same world. I wanted them to all be one thing and one cinematic experience. I wanted to be able to play all the videos and all the visuals and everything that we created back to back and forth to feel like you’re moving through one place. We started developing these key images and key concepts that happen in each video. Every video has a white void wall. Every video has an element of gore that we’re playing with and every video has these masked figures. We’re existing in the same world in this whole theme. I think the inspiration behind that was seeing artists that I love create these universes out of their projects. I think it just shows a lot of thought behind what you’re doing. I feel like it makes the music make more sense. When you understand the world that it’s living in, I feel like all of the themes and even the sonic choices are all really intentional.”

She’s also excited to go on tour! “Touring is like the most chaotic experience I’ve ever been through, but it’s so fun and so exhilarating and exciting. It bonds you with your team and your crew. My producer, who I make all my music with, tours with me, and my boyfriend tours with me and I have a couple friends coming out with me. You’re sort of traveling the country with your friends and everything’s on fire, but it’s really fun.” Chaos is always better when you are sharing it with the people you love.

i hope you know what you're doingKiNG MALA

Stealing The Spotlight: An Interview with The Stolen 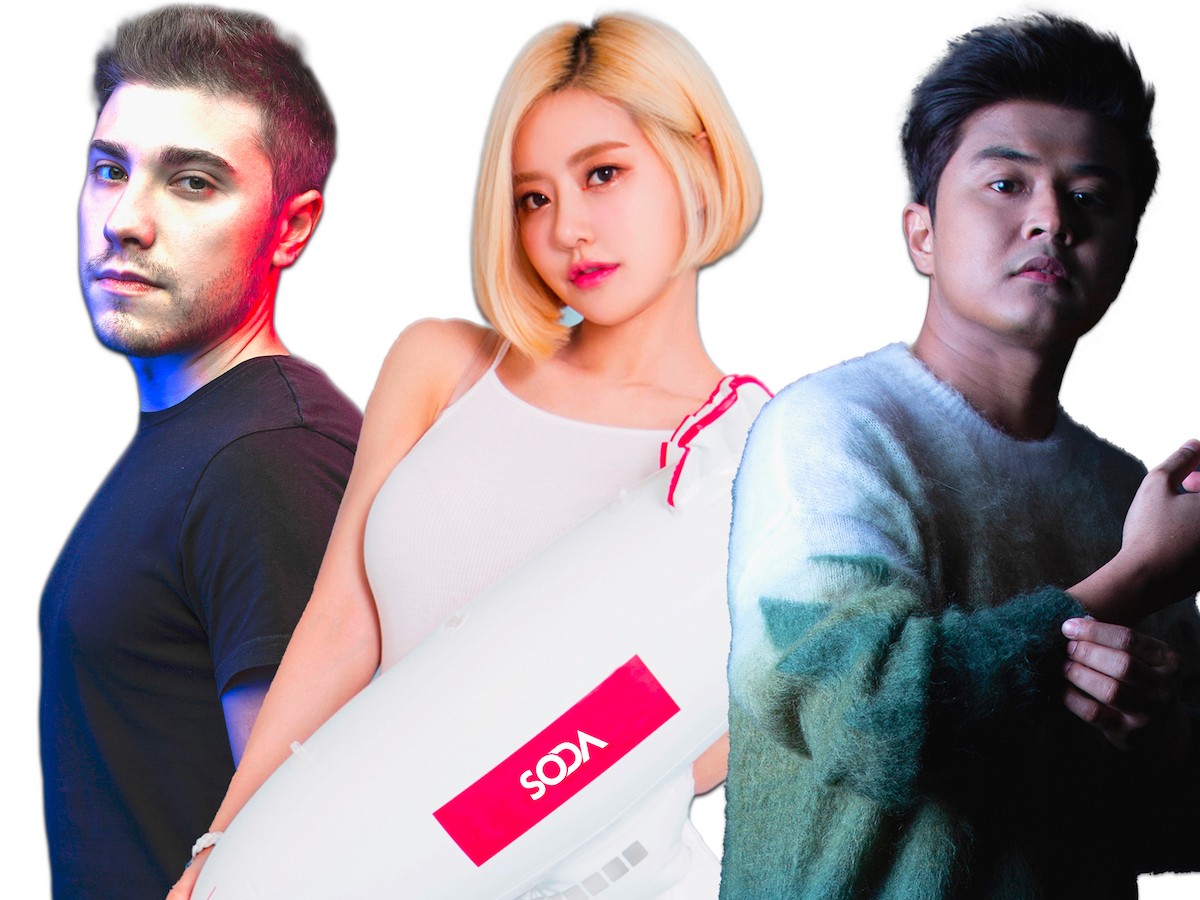