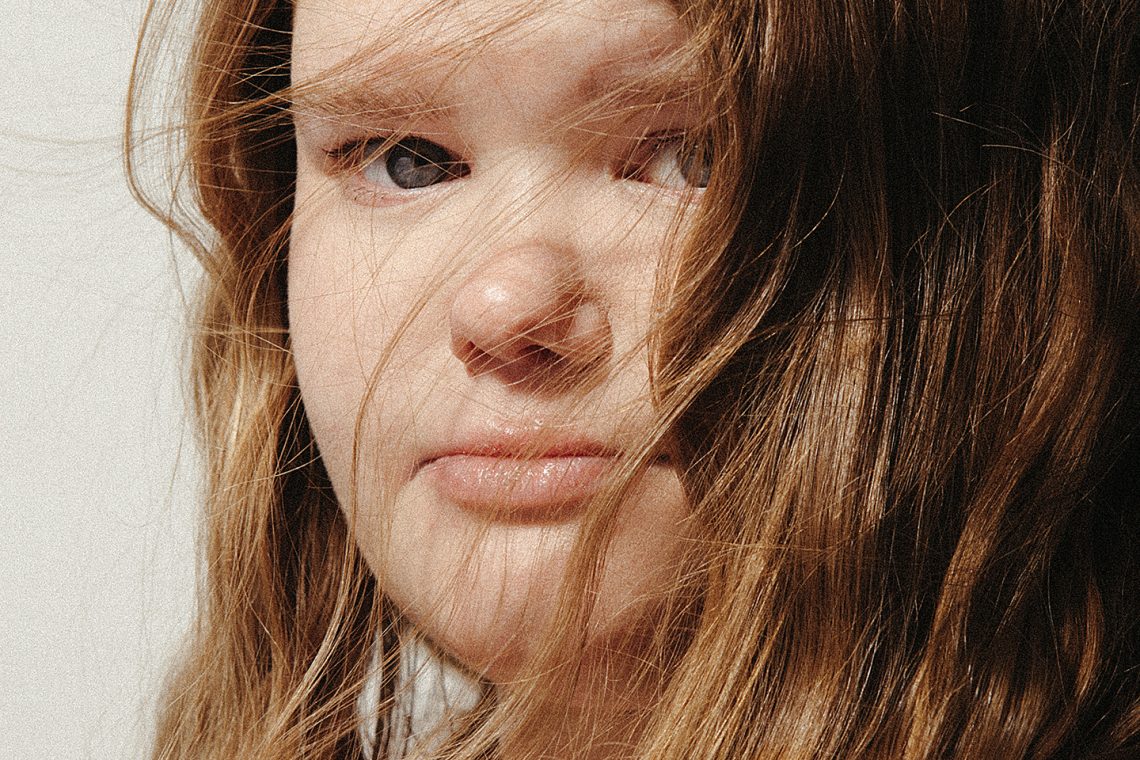 Surprisingly for an actor, Michelle McLeod had terrible stage fright as a child…or so she believed. Rather than giving into fear of failure, she learned to embrace it. “I think, what I realized later in life, is that the ‘stage fright’ I experience is the feeling of wanting to do the absolute best that I can in a role,” she reflects. “It can be scary being an actor. You have to be emotionally open and vulnerable and as a child, I guess I didn’t know how to do that. There is always a fear that you might mess up or you aren’t good enough. Also, as someone living in a larger body type, I was made to feel like I didn’t fit into the theater world. I still have those fears when performing now, however, I’ve managed to re-label my stage fright anxiety as excitement. I get butterflies just thinking about how much fun I am going to have being in my element. I was determined to go into acting because it is the most thrilling and challenging thing I could ever do. I care about it very much and I am very much steadfast in my dreams.” 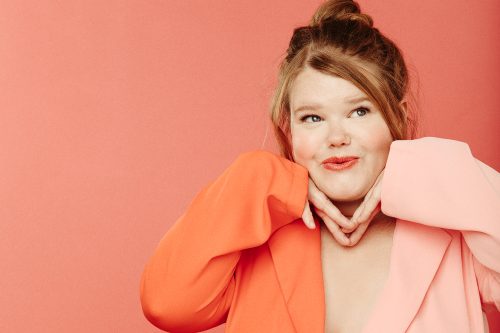 Each role allows her to believe in herself a little bit more. “Performing is an interesting journey for me. I have always felt very proud after I have put myself out there, whether it be in a play, doing live comedy, or auditioning and performing in film and TV. It can be nerve-racking, however, I know that by being cast in something, someone has trusted me enough to do a role justice and to serve a purpose in the story or a medium we are creating. It becomes an honor and for that time, I am very confident. There is always a quiver of not being enough, especially in the film world, performances are judged so deeply, but I remain confident that the work that I put out at any time is my best in that moment and with that in mind, I am able to carry the confidence forward in my career.” She takes time to appreciate her own accomplishments. “I am most proud of how I have managed to handle myself through this journey. Everything has been so surreal for me. Some personal milestones I have already achieved are still so surreal. Literal dreams have come true. When I starred in Don’t Talk to Irene (2017), it was one of the most cathartic experiences I have ever had. I had the opportunity to portray what it is like as a big girl thriving in a menacing society. I learned about self-love through that experience and how to retain my confidence as an actor. It showed me that I can take risks and be myself. It also opened up my world to a support system in audiences that I could have never imagined. In Women Talking, I am proud of my ability to ‘run with the forces,’ so to speak. Being cast among some of the most notably talented actors in Hollywood, it is easy to look inwards and think that I might not measure up. Watching the film now, I am proud to see myself immersed with the cast and holding my own. With technique and poise, I know this is what I am supposed to be doing with my life.”

The aforementioned star-studded project is a compelling tale of finding agency along with your voice. “Women Talking is a brilliant film, inspired by true events that were eventually adapted into a fictional tale written by Miriam Toews. It takes place in a colony where the women were tranquilized and raped in their sleep and made to believe that demons were the culprits. It was only after a male perpetrator from the colony was caught that they realized that the men they had trusted had raped and gaslit the women to believe that these attacks were imagined. Ultimately, our movie starts as soon as the guilty men are taken away from the colony. This is the first time that the women have the opportunity to speak candidly with each other about the situation. It is the first time they practice democracy to vote whether they stay, stay and fight, or leave as a consequence of these attacks. It is the first time they freely explore ideas outside of their confined ideologies. This is the first time they decide to take their power back as women.” Michelle plays Mejal Loewen. “Mejal is one of the women in the chosen families who discuss the options of the women with great care. They must consider all perspectives when it comes to making a decision on behalf of the women of the colony. Stuck between the two emotional points of view of Mariche (Jessie Buckley) and Salome (Claire Foy), Mejal shows up in the group with a more introverted approach. She quietly explores how she feels about being raped and gaslit for so long and internalizes it. Her trauma ultimately manifests itself as anxiety which causes her panic attacks. Without having a label or any way to describe or understand her anxiety, she uses smoking as a vice to help calm her through these moments. For me as an actor, this is a nod to mental health and the experiences we have with it that are often ignored, not talked about, or scrutinized. Having dealt with anxiety in my personal mental health journey, it was important to me to show how anxiety can manifest itself when ignored through Mejal’s experience. All the women in the film deal with their trauma differently. Mejal’s comes through in bouts of flashbacks and panic attacks and is dealt with in resiliency and vices.” 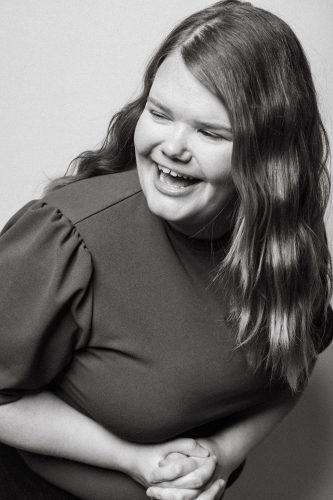 This devastating series of events creates a fork in the road between Mejal and her sister Mariche. “As Mariche’s younger sister, Mejal has had the opportunity to see Mariche set an example as a ‘woman’ in the colony,” Michelle explains. “In this moment, Mejal can choose to follow in her sisters’ footsteps or be bold and start to separate herself from the traditional expectations within the colony. Unable to get too close to her sister as Mariche is terribly reactive due to her ongoing abuse trauma, Mejal has always quietly sat on the sidelines of her family. There is a fire burning in her, similar to her sister Mariche, however for Mejal, it manifests less in the attachment to religion and the colony and more within the need to escape a place associated with so much fear. You see Mejal often look to Mariche for a reaction throughout the discussion to find a subtle sense of affirmation from her family.” Having been saddled with a very strict life path, Mejal begins to view the horror as a simultaneous opening for rebirth and reinvention. “Mejal is only about 20 in this setting and by that time, you are already married with children. You grow up fast. The future is still uncertain. Everything that Mejal has ever known or thought she has known has been flipped, turned upside-down. Have you ever had that? Have you ever believed in one aspect of reality so confidently and then all of a sudden, everything you thought you’ve ever known turns out to be wrong? Or when you experience a big change without any mental preparation, that in itself can be traumatizing. I believe it is when Mejal realizes she has been gaslit for so long and ultimately made to disbelieve her own experience that causes her the most trauma. She is in the process of learning to trust herself again. Giving yourself permission to feel, act, and think. Something so simple but so foreign. Still considered as one of the young in the family, leaving gives her an opportunity to imagine what life could be like where she doesn’t have to live in fear or have her trust misused. To leave is the start of a new relationship of self-love and forgiveness.”

In spite of the burdens they carry, the characters strive for brief respites in levity. “There’s a great line in the film where Autje (Kate Hallett) comments that sometimes it is easier to laugh than cry when things are overwhelming, which is so true. When things get that dark, it can sometimes be easier to see the light in some situations just for a mental break. This film may deal with a lot of heavy content when it comes to trauma, but I would actually argue there is more joy in the film. This film is about opportunity, progression, democracy, self-love, education, growth, power, etc. These are all terms of joy to me. It is the joy of exploring the unknown and creating a greater good. We all struggle with some darkness before we can grow and that is exactly what is taking place here. As an actor, it was such a joy to be with such a supportive cast of women and our fearless leader Sarah. I have never felt so much support on a set. It was by this example, I think, that we were able to push ourselves and juxtapose our trauma and joy. We became a family.” Michelle aspires that the film will reignite dialogue about our passive acceptance of an often violently misogynistic society. “I think this film will generate a lot of conversations. Not just on oppression and abuse, but on so many more topics. Trauma, mental health, social constructs, religion – there is so much to discuss. What this film does is shed a non-threatening light on the truths of what it is like to be a woman. The traditions of gender roles and how they have had such a long-lasting effect. Not only in the confinement of a community like the one we portray, but even as deep-rooted systems in our modern day social experiences. I’ve commented before that it is almost imprinted in young women to always have a safe place to go, to carry their keys between their knuckles, and to be aware. There is so much danger that exists that we just accept in our roles as women and that is a narrative I hope this film helps to change. We are born into this world as excellent students, we learn by example and unfortunately, the examples set before us are ones of misused leadership and trust. There are also many forms of abuse in this world, not only physical but emotional, mental, and generational – I hope this film helps to start the conversations needed around these topics so that we may further explore how these types of abuse have affected the world we live in.” Women Talking will premiere in select theaters on December 23rd and everywhere in January.

Channing Tatum Mourns ‘tWitch’ After Starring In ‘Magic Mike XXL’ Together: ‘I Have No Words’