Dec. 18’s ‘SNL’ episode was a shuffle due to COVID! In a last minute switch, Tina Fey replaced Colin Jost on ‘Weekend Update.’

Cute the time machine: Tina Fey is back on Saturday Night Live! The 51-year-old unexpectedly popped in to host Weekend Update in place of usual host Colin Jost, 38. “It’s not what you think — he’s having work done,” she joked alongside Michael Che. The duo were on the main stage at Studio 8H versus the news desk set up, performing for an audience of just three: Tom Hanks, Kenan Thompson and of course, host Paul Rudd.

“We thought we’d read these dumb jokes and see if we could make these three laugh,” Che added as Tina asked the trio to confirm they have not heard the jokes before. “Except the two you blew in the rehearsal,” Tom called out, before Michael went into the first stories of the night: OJ Simpson‘s parole being over early and Elon Musk getting a major cover from Time. “Elon Musk is was named Time‘s Person of the Year, which you can read on your phone as your Tesla drives itself into a lake,” Tina hilariously announced. 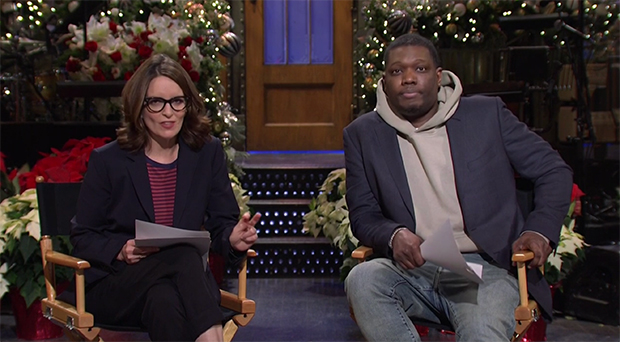 Tina Fey and Kenan Thompson on ‘Weekend Update’ from the main stage at ‘SNL’. (NBC)

Of course, Tina is no stranger to Weekend Update: the Mean Girls star hosted the segment with co-star Jimmy Fallon from 2000 – 2004, and then with real-life BFF Amy Poehler from 2004 – 2006. Tina and Amy were the show’s first-ever and only all-female anchor team. Tina originally joined the show in 1997 as a writer,