Nadya ‘Octomom’ Suleman’s 14 Kids: Her Octuplets Plus 6 More — What We Know

Nadya Suleman is known for being ‘Octomom’ but she has a whopping 14 kids in total! Here’s everything you need to know about her teenagers.

Nadya Suleman earned the title of “Octomom” after she gave birth to eight children at once. On January 26, 2009, she gave birth to octuplets and made history as the second woman to ever do so. Before the octuplets, she had six children, two of which are twins. While the mom of many children initially denied it, she later admitted that she had all 14 of her children through IVF. In fact, six of her octuplets came from six embryos leftover from her previous IVF. 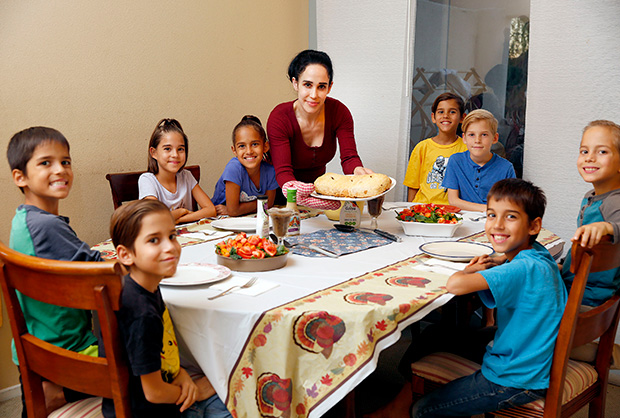 Nadya Suleman and her kids sit down for dinner. (MEGA)

In the present day, she and the octuplets have defied odds as all of them have survived and grown up to be healthy teenagers. In fact, the mom of 14, recently celebrated the 13-year-olds’ birthday with a sweet message and throwback pic of them when they were pre-school aged. Here is everything you need to know about those octuplets and her other six children.

The eldest of Nadya’s children, Elijah Makai Soloman, was born on May 19, 2001. At 20 years old, he was her only child at one point. Little did he know, he’d have 13 brothers and sisters. His mother praised him and posted a picture of him blowing out the candles on his most recent birthday. “Happy 20th birthday to my first baby boy Elijah! Despite the battles we have fought and challenges we have faced over the years, you have grown into such a kind, caring, conscientious, and humble young man,” she wrote in the post.