Mikiiya Foster wasn’t quite prepared for what was waiting for her when she arrived at the corner of Sycamore and Cochran on Saturday, June 6.

It had only been eight days since the 18-year-old recent high school graduate first had the idea to organize a Black Lives Matter protest in her hometown of Simi Valley, Calif., a suburb outside of Los Angeles. Chatter around town—which was home to the infamous Rodney King trial and remains traditionally known for its conservative politics—and on social media hadn’t been especially favorable towards the idea of the march. Businesses has boarded up in fear of the destruction that had occurred some 40 miles away in L.A. The chances were high that turnout might be low.

“I had made a comment saying like, you know, ‘Even if there’s only three people, I’ll still be there,’” Foster told E! News exclusively of her mindset leading up to the event.

And yet, when she arrived at the intersection that stands almost smack-dab in the center of town, a different story entirely was waiting to be told. 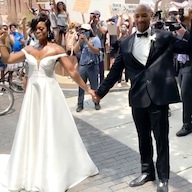 A crowd had begun to swell, filling the street they’d soon be marching down. Final estimates of the size totaled over 2,000. “I couldn’t believe it,” she admitted. “I mean, in the beginning of the protest, I honestly couldn’t see how far back it went because I was up near Chase Bank, so I could only see that small corner. That itself I was just like, ‘Oh my God. What is happening? Did I do this? How did I?’”

How did an 18-year-old with no prior experience in community organizing—whose prom and graduation were canceled amid COVID-19—inspire with such force a community that’s left her feeling,

Shine Bright Like a Diamond: 7 Tips to Find Your Statement Necklace