Kourtney Kardashian finally shared photos from her Las Vegas wedding to Travis Barker, where the couple rocked black leather jackets and kissed in front of an Elvis impersonator.

Kourtney Kardashian, 42, gave her fans a glimpse into her Las Vegas wedding to Travis Barker, 46. The reality star posted photos from the ceremony to Instagram on Wednesday, April 6. The images show Kourtney and Travis wearing black leather jackets and kissing at a chapel in front of an Elvis Presley impersonator. The couple also rocked matching pairs of black sunglasses. They held hands throughout the romantic pictures, and Kourtney held a bouquet of roses.

In her caption, Kourtney seemingly clarified that the engaged couple didn’t get legally married in Vegas. “Found these in my camera roll. Once upon a time in a land far, far away (Las Vegas) at 2am, after an epic night and a little tequila, a queen and her handsome king ventured out to the only open chapel with an Elvis and got married (with no license),” she wrote. “Practice makes perfect.”

Kourtney and Travis showed up to the One Love Wedding Chapel in the early morning hours of April 4, after Travis performed at the 2022 Grammy Awards. Marty Frierson, the owner of the chapel, told Page Six that the couple made it clear that they would only say “I do” there if he could secure the Elvis impersonator, which he managed to do. “After they got married, they walked out onto the driveway, tossed the bouquet and sped off,” Mary told the outlet. 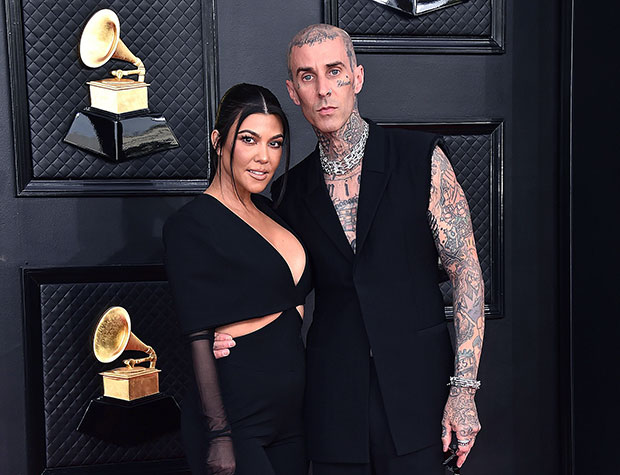 After dating for less than a year,