They’re not walking down the aisle just yet, but Bennifer sure looked cozy at the ‘Marry Me’ premiere in Los Angeles!

Marry me, Jennifer Lopez? Perhaps the movie star’s beau Ben Affleck hasn’t popped the question just yet, but things are looking up for the couple who were photographed at Jennifer’s Marry Me Los Angeles movie premiere getting pretty cozy! J.Lo wore a gorgeous bridal-style white mini-dress, with long sleeves, lace detail, and an adorable shortened train that flipped out in the back. The “Let’s Get Loud” singer paired her dress with a silver clutch embroidered with white flowers and silver strappy pumps which also featured a flower-like details on the toe.

Ben, for his part, wore a groom-like look with a long black tailored jacket over a button-down white shirt and dark tailored pants. He gave his blushing [movie] bride-to-be a sweet kiss as she was all smiles for the event. 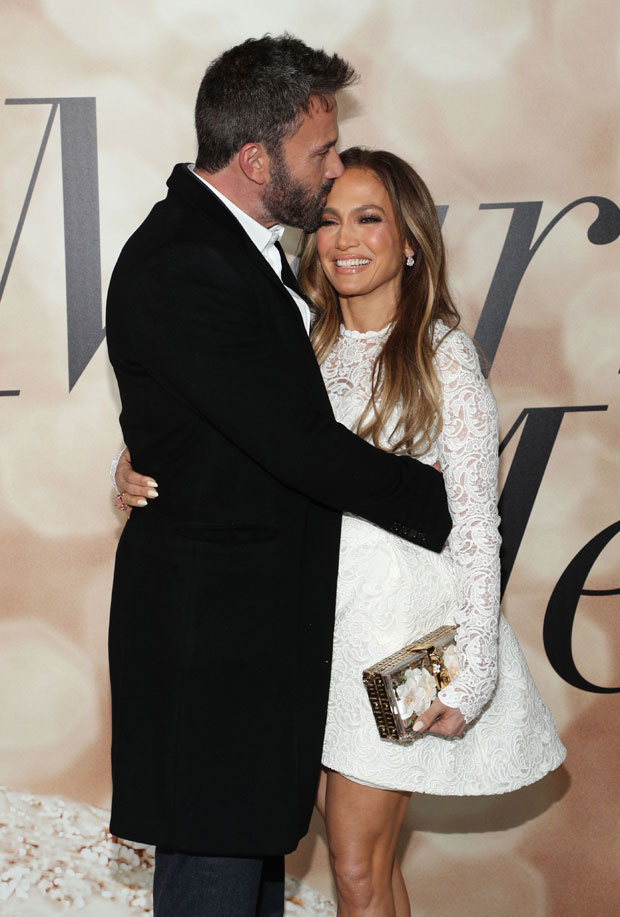 J.Lo gets married in her latest rom-com film role — though not to the man she expected. The trailer for Marry Me shows the singer as Kat Valdez, a Latin global superstar who is engaged to fellow superstar Bastian, played by Maluma. During a live concert, Kat learns the devastating news that Bastian is having an affair with her assistant. When she spots a random math teacher named Charlie Gilbert (Owen Wilson) holding up a “Marry Me” sign in the audience, Kat accepts Charlie’s unintended proposal and invites him onto the stage to say “I do.” Kat and Charlie are then forced to endure their impulsive relationship in the public eye and,

How Brie and Nikki Bella “Let Loose” While Celebrating Their Birthdays

Taylor Hawkins: 5 Things About The Foo Fighters Drummer Dead At 50

Magic Johnson’s Kids: Everything To Know About The NBA Legend’s 3 Children