The New Year’s Eve party has repercussions for everyone. Jules realizes there’s something going on between Rue and Elliot, while Nate and Cassie’s relationship continues to grow in secret.

Nate is taken to the hospital after Fezco’s brutal attack. Maddy drives him while Cassie is in the back holding his hand. This whole Cassie situation isn’t just a blip. He’s apparently in love with her. Nate thinks that he’ll be able to “fully surrender himself” to Cassie, whereas with Maddy everything was always a game. He believes Cassie can bring out the best in him. He fantasizes about a life with her Cassie, but he knows it can never be because Maddy has that disk.

Rue Is Caught Between Jules & Elliot

The first day of school after the new year arrives, and Rue has everything she wants. She’s back with Jules, but is it enough? While kissing Jules, she spots Elliot at school. She doesn’t want Elliot to mention drugs to Jules. Elliot introduces himself to Jules while saying hi to Rue. Turns out, Rue has been hanging out with Elliot and doing drugs. Jules clearly knows something’s happened here and walks away with tears in her eyes. 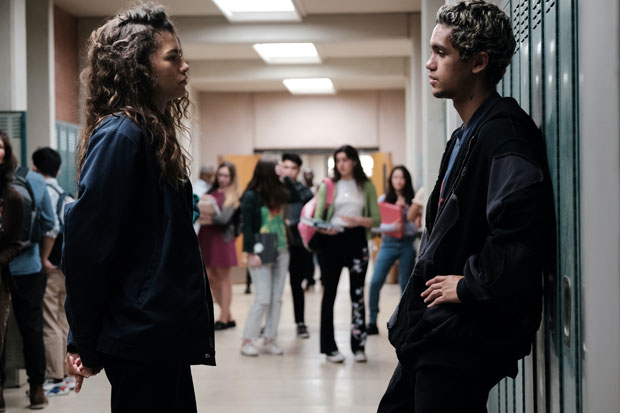 Zendaya and Dominic Fike as Rue and Elliot. (HBO)

Since New Year’s, Cassie has been in the midst of low-grade depression. She can barely get out of bed. At one point, Lexi points out that Cassie still has Nate’s blood on her legs. Cassie never would have hooked up with Nate if he and Maddy had still been together.

Meanwhile, Maddy isn’t sleeping. As much as she won’t admit it, she wants to be with Nate. Nate ends up texting Maddy thanking her for taking care of him.

5 TV Stars Who Fell Into Their Job