Dr. Squatch Celebrates Those Dads ‘Who Let Their Daughters Braid Their Hair’ In Super Bowl Ad

Toxic masculinity gets tossed – along with synthetic soaps – in Dr. Squatch’s first Super Bowl commercial. It’s one that celebrates men who ‘slay dragons’ and let their girls dress them up like princesses.

“Your soap is [quack],” says comedian James Shrader at the start of Dr. Squatch’s commercial for Super Bowl LV. The men’s all-natural soap and personal care company is airing its first-ever national ad during the big game on Feb. 7,  one that shows male-identifying viewers that there’s a better way to wash. The commercial also shows there’s a better way to be a man. James describes the kind of man that Dr. Squatch’s line of products are for by listing off traditional aspects of masculinity. “Men who build things, open pickle jarks on the first try, [and] slay dragons,” before flipping the script to say that men also “let their daughters braid their hair.” 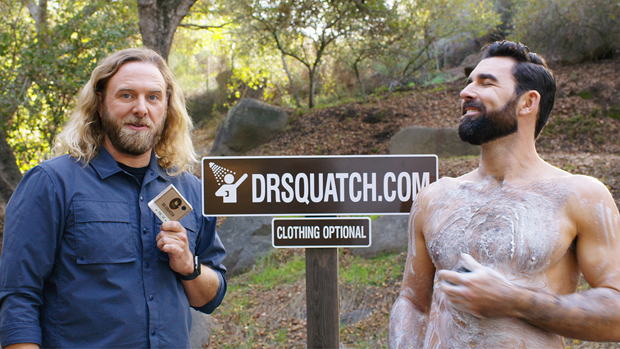 If you’re going to be naked in the woods, it makes sense you’d use Dr. Squatch, right?

After all, Dr. Squatch is, as James puts it, for men who “like to feel good and smell titillating.” The commercial captures the humor of Dr. Squatch’s viral online ads that featured James and the trademark line, “You’re not a dish. You’re a man.” This marketing strategy – combined with the fact that they offer natural products that boast such scents like Pine Tar, Wood Barrel Bourbon, Deep Sea Goats Milk, and Cedar Citrus – has seen this fast-growing startup pull in over $100 million in revenue for 2020 and see an over 350% increase in sales year-over-year for the last two years, per a news release.

Ryan Seacrest Is Leaving E!'s Live From the Red Carpet

FS1's Rachel Bonnetta Riding with 'Underdog' Tom Brady In Super Bowl LV, Will It Pay Off?