Dr. Dre Seen With Mystery Woman In 1st Pic After Being Ordered To Pay Ex Nicole Young $300K A Month

Amid messy divorce proceedings with Nicole Young, rapper Dr. Dre was spotted out with a mystery woman in Los Angeles this week.

A year after his split from Nicole Young, Dr. Dre has been spotted out with a mystery woman. The rapper, real name Andre Young, 56, stepped out in Los Angeles on Thursday, July 29 and met up with a dark-haired woman in an orange dress ahead of the weekend. 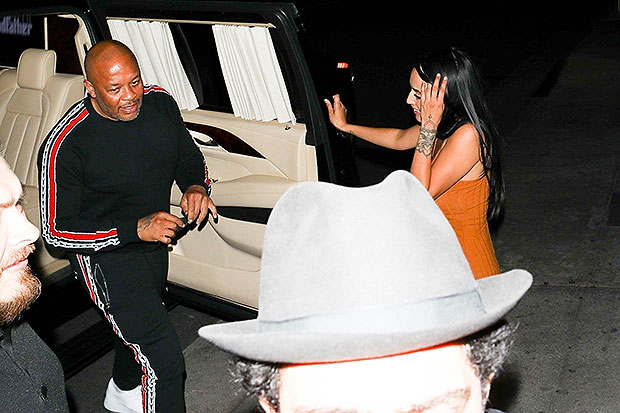 Dr. Dre and a mystery woman in Los Angeles on Thursday. (The Daily Stardust/BACKGRID)

Dr. Dre stepped out of an SUV in a casual black sweatshirt and matching sweatpants with stylish red and white stripes running down the side. The producer kept things comfortable and finished the look with some sneakers.

The sightings comes after the rapper was ordered to pay Nicole, 51, over $290,000 a month in spousal support following their split last June. After 24 years of marriage, the former lawyer filed for divorce from her rapper husband last summer, citing irreconcilable differences. The duo share two adult children, Truly, 20, and Truice, 24, together.

The two have since been battling it out in court over the validity of their prenuptial agreement, among other things. It’s been a contentious split, as Nicole has accused the producer of abuse. Per multiple reports from earlier this year, Nicole alleged that the hip-hop mogul “held a gun to my head” in court documents filed following the split.

In documents filed in the Superior Court of California, she said the “Still D.R.E.” rapper “verbally and emotionally decimated my personhood to the extent that I currently suffer from post-traumatic stress syndrome.” The rapper denied the allegations in the documents,

January Jones, 44, Wears No Makeup While Belting Out Celine Dion In New Video

Get Your Praise On For The Stellar Gospel Music Awards

An Interview With Pop Songstress Lisey Tigra and Her New Single, "Criminal Mind"