Chris Martin left his shoes at home during a recent outing to the BBC Radio 1 Live Lounge, walking barefoot in the streets of London.

Chris Martin, where are your shoes? In London on October 11, the Coldplay frontman, 44, kept is casual when he stepped out of the BBC Radio 1 Live Lounge. So casual, in fact, that he did not wear any shoes. The English singer was photographed walking barefoot as he exited the studio on Monday, wearing a blue t-shirt and some trousers with paint splotches. 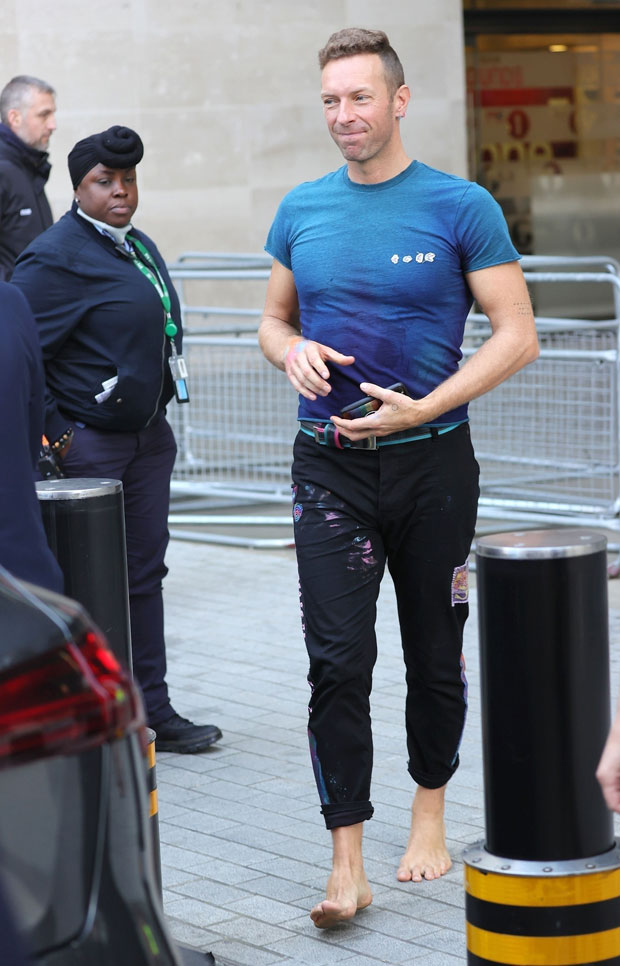 The musician appears to have an affinity for going barefoot outside. While in Spain with Dakota Johnson in July, Chris was spotted strolling arm-in-arm with his girlfriend of four years around the streets of Mallorca sans shoes. He looked casual in a black tee and shorts, while his actress partner wore a blouse, denim shorts, and some shoes.

The couple have been linked since 2017. In December 2020, the notoriously private duo became the subject of engagement speculation after Dakota was spotted with a giant emerald ring on her finger. The two have, of course, never confirmed the rumors, but a source previously told PEOPLE that Chris and Dakota are “pretty serious.”

“Chris lives in Malibu and Dakota seems to love hanging out there,” the source said. “They occasionally go for dinner with friends, but mostly have friends over at home. They go to the beach together and [go on] walks around the neighborhood. They seem to enjoy sharing a quiet life. It does seem they are getting more serious.”