In a new series of photos, Britney Spears channeled one of her most iconic performances of all time and became a ‘snake.’

Britney Spears mesmerized the world two decades ago when she danced on stage at the 2001 MTV Video Music Awards with a live Burmese python draped around her neck, while singing her hit ‘I’m a Slave 4 U.’  And, on June 7, she appeared to be feeling nostalgic for the moment when she dressed up in a skin tight snake-skin catsuit for a series of photos shared to her Instagram page.

In the photos, the 39-year-old pop star posed like a snake, while rocking her trademark black eye make-up. And, in case there was any doubt about why she was dressing up in the reptilian costume, she referred to her unforgettable VMA’s performance in her caption. 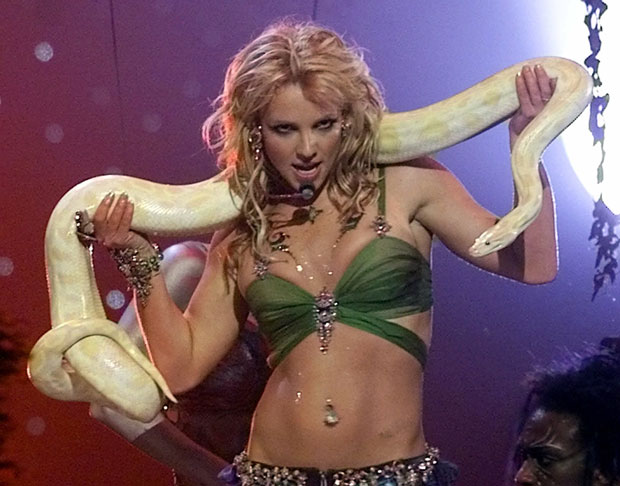 Britney Spears famously held a live albino Burmese Python while she performed on-stage at the 2001 MTV VMAs. [Shutterstock]“I held a snake at the @VMAs one time but decided to go ahead 20 years later and become the motherf***ing snake myself!!!!’ she wrote alongside the slideshow.

“And since TRICKS ARE FOR KIDS you tricky little sh*ts … who knows what color snake I will be tomorrow!!!!??? STAY SAFE folks and watch out for the [three snake emojis,]” Britney added.

Britney’s many fans flooded the comments section with praise for the princess of pop. Social media star The Fat Jewish wrote: “NOTHING BUT RESPECT FOR MY PRESIDENT.” Another supportive fan wrote: it’s Britney’s world and we’re just living in it.”

Although there plenty of supportive comments calling Britney “iconic”, others simply seemed confused by the “tricky” caption. “I’m sorry WHAT???” one fan commented.

Over 20,000 People Gave Positive Reviews To These 8 Shampoos That Help Maintain Your Hair Color At Home

5 Jackets Every Man Should Own